E-cigarettes have been around in today’s market a lot longer than some people may realise and they have evolved as times gone on and technology has advanced.

In this article, I will look at where vaping began, where it is at today, and how trends in vaping occur and things have now come full circle in regards to what’s popular on today’s market. The First Phase – The Cigalike is created

You may have heard of a man from China named Hon Lik. If you haven’t, get to know about him as he is the creator of the Cigalike style e cigarette that revolutionised vaping.

Hon devised this e cigarette as a way to quit smoking after his father passed away from Lung cancer, caused by smoking cigarettes, as well as what he believed would help combat the global social problem of people smoking cigarettes and potentially ending up like his father.

Hon used a piezoelectric ultrasound element to vaporize a nicotine solution in a device that resembled a cigarette, and thus the Cigalike was born. Looking at these, it’s essential a disposable vaping device…remember I said about things coming full circle? Keep reading and you’ll find out why I said this.

Fast forward a decade, and Imperial Tobacco (The company behind Blu e cigarette products) bought Hon’s patents of what he had created for a massive 49 million pounds and then this is where the technology started evolving. The Second Phase – The pen style vape enters the market

Vaping evolved to the second generation a few years later to devices that are actually still able to buy and are used by people today and that is the pen style vape pictured above.

These devices are quite different from the original cigalikes, not just in design, but the battery size is a higher mAh than the cigalikes and they can also be filled with vape juice rather than being prefilled closed units.

These come in two parts, the battery and the clearomiser that screws on the top. Within the clearomiser is either a coil that can be changed when necessary, or they’re a sealed unit with a coil and wick inside that is then fully disposable of.

As I mentioned, people still use these today and there is still a demand for them. Some people started out on these devices and won’t want to try anything different. As the saying goes if it isn’t broke, don’t fix it! And in come the big boys to the vaping scene! Mods are the big, chunkier devices you see people with that run at high power to create massive clouds of vapour and fill the air with an aroma of doughnuts or candy floss.

Mods coined their name from the word modification, because some people realised the external 18650 batteries that go into vape devices are the same as Torch batteries, so people began modifying torches to be high powered vape devices. No really, they did. Don’t try this at home!

Manufacturers then drew inspiration from these and created their own, probably much safer, vape mods and floated them on to the market.

Mods either come with an internal battery installed and is charged via USB, or they take the above mentioned 18650 batteries. They can be run at anything from 1-200 watts as long as you have the right coil in your vape tank.

Vape tanks then screw on to the mods via the 510 connection and you have yourself a nice high powered vape kit! 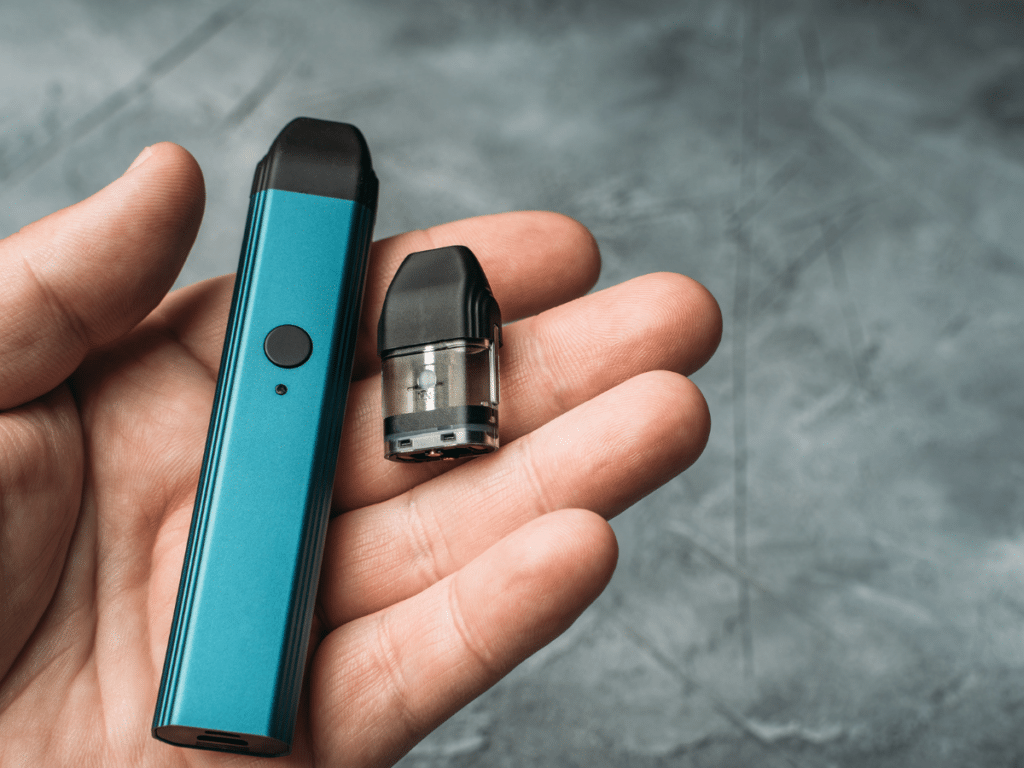 The Fourth Phase – From Mods to Pods

Pod systems took the vape world by storm from their first introduction to even now in current day! Some manufacturers created pod systems that were the device and prefilled sealed pods that just click into the device and you’re away.

But this then evolved with manufacturers creating pod systems that are fully refillable and have coils that need to be replaced rather than the entire pod.

Pod systems saw a rise in sales when Nicotine salt vape juice sales started increasing as a lot of people prefer to use these smaller discreet devices for a quick sharp kick of nicotine. The Fifth Phase – Disposables…wait, haven’t we been here before?

The fifth phase is where everything comes back full circle and we sort of end up back at phase one of the disposable being created and popular in the vape market.

However, disposables that are popular today are very different to what was popular back when Cigalikes were introduced. Disposables today come in a vast array of flavours, different shapes and sizes and covered in bright vibrant colours rather than looking like a traditional cigarette.

These are hugely popular for the convenience factor, but also get a lot of negative press and bad reviews based on how they are made, how they’re bad for the environment and also the number of underage people using them.

Disposable Vapes have been discussed in detail in separate articles I’ve written. Check out my one specifically about Disposables giving a full insight to them, as well as well as why choosing something else could be saving you a lot of money

I hope this article has been informative to you and gave you an insight on the evolution of vaping. Vaping will always have trends and there will always be something new introduced as technology advances, but it doesn’t stop things from going full circle as previously mentioned.